What no one talks about Chrome vs Firefox in browser automation? 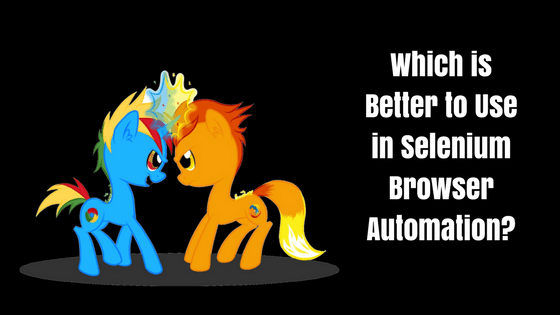 It is out there that Selenium IDE runs only Firefox exclusively. Chrome is the most popular browser, and that could mean problems, down the road. Worry not; Chromedriver is a brilliant tool that enables you to run Selenium IDE in Chrome. However, one problem still plagues testers chrome vs. Firefox, which is better.

[Tweet “Chrome or Firefox, which is better to use in Selenium browser automation?”]

It turns out that most failures during the automation process don’t result from bad coding. It is the browser which may be crashing. For this, you can automate the reboot process, to get back to testing as soon as possible. It will end up saving you time, for sure. Error rate will be different depending on the browser used. Just as expected Internet Explore version performs worse compared to the others. However not that they keep becoming better with every release. Next is Chrome, and Firebox, which seems to be on par regarding the number of errors generated.

All in all, browsers keep on improving as time goes. Other browsers like Safari 6 and Opera don’t run as efficiently on tests using selenium. Note that, while ruing tests on the latest browsers is essential, Firefox 55 won’t support the Selenium tests. In their attempt to make the browser better, developers are switching extensions from “XPI” format to the Web Extension” mechanism. Selenium, of late, has not been having regular contributions, despite being famous. Not one has taken the step to move the IDE, to gain from the new technology. According to the official Selenium Blog only one person since 2016, has been maintaining the IDE.

Making a Choice Depending on Web Users

Since both browsers work with Selenium IDE, you can select the browser based on the visitors to the website you are developing. If most of the traffic comes from Chrome, which is mostly the case, then using Chrome is the best option. All in all, what you are aiming for is a quick way to improve the testing process. Your ultimate aim may be to release high-quality code.

Another thing to know is that FirefoxDriver has bundled with selenium standard alone library. That makes it is easy to initialize and run tests in a Firefox browsers. You can check out the list of supported versions and its matching drivers.  Contrasted to Firefox, for the ChromeDriver you have to install an external file, based on WebDriver’s protocol.  Thus, considering these factors, you can make a conclusive decision on, which is better Chrome vs. Firefox.

How to Install and Run Chromedriver

After launching Selenium IDE, select “WebDriver” tab under the “Options.” Check the WebDriver” tab.  If you go to the “Browser choices” you will see an input field you find all the options firefox, android, chrome, tmlunit, internet explorer, iPad, and iPhone. Note there at all in lowercase. After the downloading the ChromeDriver, you can open the servicer via the terminal. Not all the versions of chrome are supported.

All things said both Firefox and Chrome handle the Selenium browser automation efficiently.

Contents hide
1 Comparing Browsers by Error Rate
2 Making a Choice Depending on Web Users
3 How to Install and Run Chromedriver
4 Like this:
5 Related