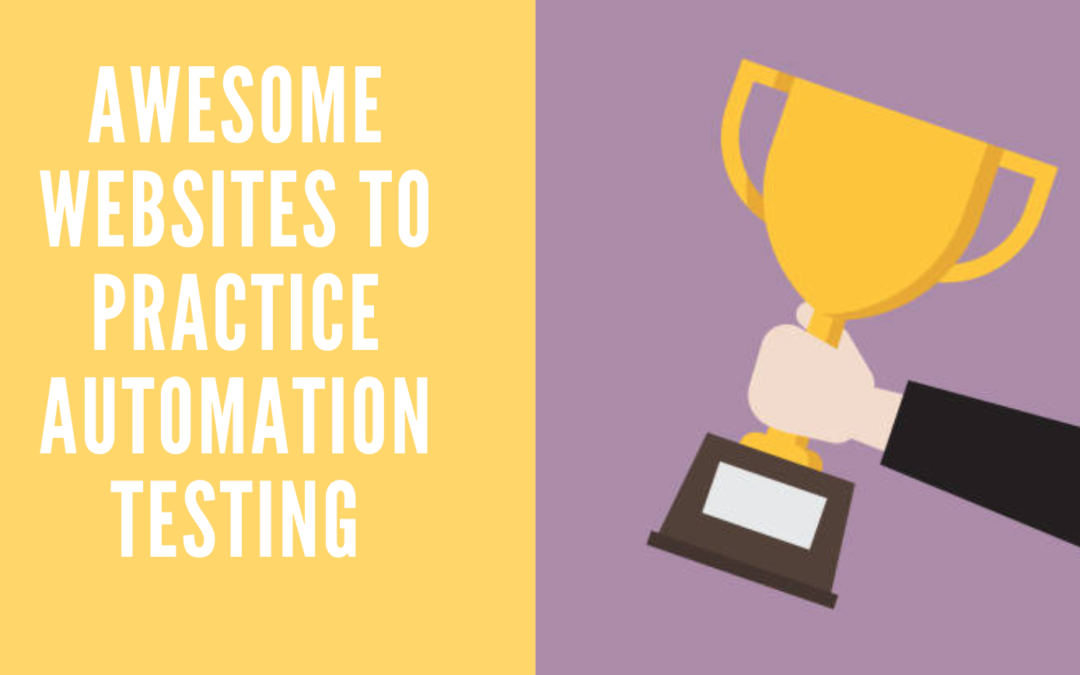 We need websites to practice our test automation skills, wouldn’t you agree?

Where do you go when you need to learn how to deal with AJAX, Angular, Kendo, and other dynamic elements?

Hence, I compiled a list of my favorite websites to practice test automation:

This list contains test automation websites that provide some unique attributes that other websites don’t have. As a result, you can pretty much combine all of them together to have a complete profile of different types of automation skills.

This is probably the best demo site that I have seen for UI test automation. This website is an e-commerce store that has several cool attributes.

First, it has a normal, working user that you can use for all of your test automation scenarios.

Next, you can use the problem_user to test the same exact scenarios that worked for the standard_user. However, the problem_user, will have tons of problems with the web app. As a result, a bunch of your tests should fail, for the correct reasons.

There is a detailed API documentation here

Cypress Real World app is a dummy site created to simulate real-world applications. You can use it to practice UI testing, database testing, and authentication testing.

This app might be one of the coolest ever because you can actually mix and match your front-end and your back end for your desired tech stack. Yet the functionality remains exactly the same! Some options you have are:

I don’t know if this website was meant to be a demo automation site. However, I do know that it is fantastic! It has all sorts of controls to play with. example:

And so much more. This might be a one stop shop for all of your HTML elements and controls.

So many websites that I’m only going to point out the differentiating features:

This is a demo banking website from Applitools. You can login to the app simply by pressing the login button and not even entering any credentials.

It doesn’t seem to do much though besides being able to login. None of the buttons seem to work. Only the UI seems to get refreshed with a few of the buttons.

Dave designed an excellent place to practice different kinds of test automation scenarios. Some of the scenarios that you can try to automate include:

This is a banking website that allows for automation through the UI and through the Web Services (REST and SOAP). This is hugely beneficial because it will allow you to think of your automation in terms of the automation pyramid.

This means that you can learn how to move as much functionality as possible to the API layer and then do the rest of the automation through the UI layer. This is the ultimate approach to automation and having a website like this is amazing for practice.

This is an app that I recently learned about from one of my coworkers. This is a sample Address Book app. Some things that you can practice here are basic CRUD operations for addresses.

There is a detailed API documentation here

In this repository you will find our Sauce Labs sample-app. You can use it as a sample app for testautomation on your local machine or in our Real Device Cloud.

Restful-booker an API that you can use to learn more about API Testing or try out API testing tools against. Restful-booker is a Create Read Update Delete Web API that comes with authentication features and loaded with a bunch of bugs for you to explore. The API comes pre-loaded with 10 records for you to work with and resets itself every 10 minutes back to that default state. Restful-booker also comes with detailed API documentation to help get you started with your API testing straight away.

PetStore is an online REST API for managing a pet store.

This is really a nice fake e-commerce site to practice test automation. If you have a project where you need to practice different flows for online stores, this is the website you want. You can practice

This is a neat little website with simple elements to practice test automation with. It has:

This is a React JS web app that I forked and modified to fit the needs for test automation. I plan to maintain this app for a really long time so that it never dies and we can always use it for practice.

Did I miss some sample sites? What other practice sites or apps would you like to see listed? Let me know below so that I can expand this list.