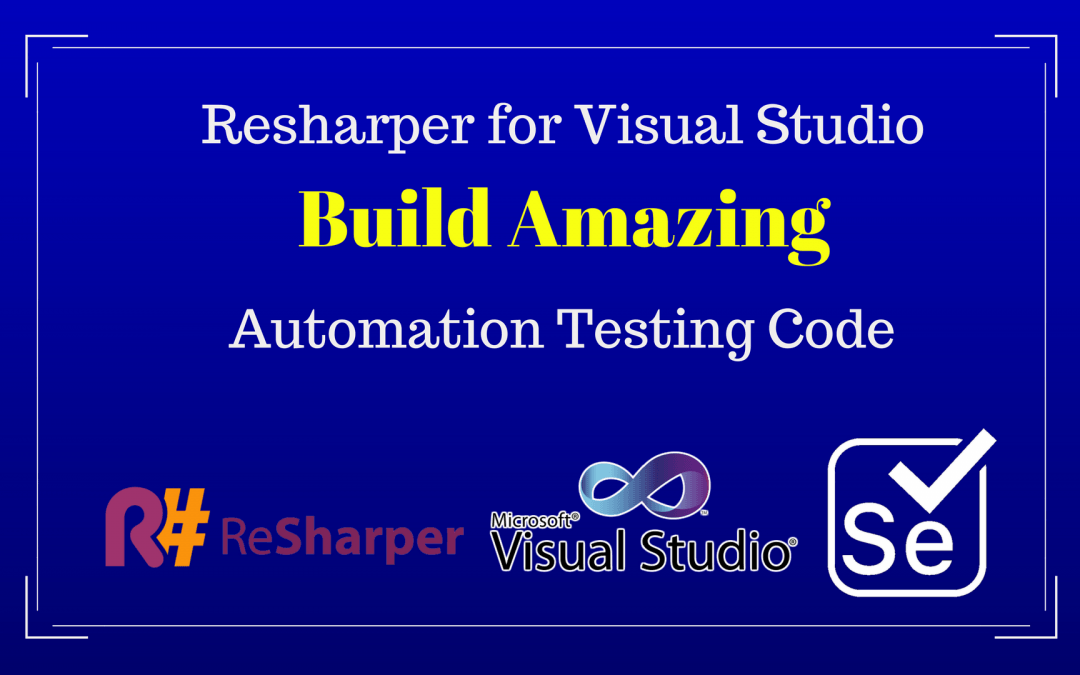 Something amazing happened to me recently! I am always learning, growing and exploring other resources. And recently I stumbled upon an amazing Visual Studio productivity tool called ReSharper. According to JetBrains, the creators of ReSharper, “ReSharper makes Microsoft Visual Studio a much better IDE. .NET developers worldwide wonder how they’ve ever lived without ReSharper’s code inspections, refactoring and navigation.”

From my first usage, I can claim that this assertion is completely correct. Within a few minutes of installation I had ReSharper improving my code in countless ways. It was simply phenomenal!

By the way, I am not an affiliate of any sort for this company. I just freaking love the tool and wanted to share the awesomeness with my fellow Software Testers.

ReSharper is a tool that can be plugged into Visual Studio to help improve its IDE. In thsi post, we will discuss a ton of benefits that can come from ReSharper.

This is the site with their download link. You get a Free 30 day trial.

Why Should Automation Engineers Use ReSharper?

Personally, love this tool. It simply makes your code much better without having to spend hours refactoring. It helps to analyze your code during design time and helps you to fix tons of different errors and warnings. ReSharper removes redundant code, unused variables, and unused references. It helps to keep you following the Microsoft standards of using C# and at the same time makes your code easier to understand and maintain. It even helps to improve your logic so that it is easier to follow in the future.

After about 1 hr of refactoring, the code in my automation testing framework was drastically different! Only in good ways. A bunch of explicit casts was replaced to implicit casts with the click of a few buttons. Several complicated nested loops and statements were replaced with much more efficient logic. So many old references were deleted from my solution to make for a much lighter piece of architecture. The coolest part is that I am actually learning from this tool. Some C# Coding Standards and different ways to refactor logic are some of the most drastic lessons that I learned.

Basically, it’s saving my employer time and money while teaching me some cool information. Now my automation testing framework code is as sweet as Organic Raw Honey! Let’s really dig into some of the awesome features.

Keep in mind that I just started utilizing this tool. Therefore, there may be tons of other amazing features that I am not aware of. However, since the beginning, these are the ones that blew the pants off of me.

ReSharper has continuous code quality analysis for a bunch of different languages. I’m currently using C# so that’s the one I cared about.

Let’s dive deep into some real world examples with code so that you all can get a full understanding with some much required practice. Have you ever faced a situation where you needed to update the signature of the method and that method has 20 references? I sure have and it’s a pain in the gluteus maximus. ReSharper makes this process so easy. Take a look at this example:

Resharper’s greatest contribution is in navigating errors. Without ReSharper, you would have to navigate to every single error and update the calls to have 2 new strings. What a pain in my muscular butt! However, with ReSharper it’s easy. These are the things you need to do:

So, continuing with this code base, we can further clean up.

We can make 1 more awesome fix to the code using ReSharper’s big brain. ReSharper lets you know if there are variables that are never used.

This really saved my life recently. I was creating an automated test in Selenium WebDriver and copied over an assertion message. Because the message contained a lot of information, I stored it in a variable. I changed the variable name but never updated the variable that was being used in the assertion clause. As a result, I was checking 1 condition, but my assertion message was for a completely different check. I don’t know if I would have ever found this problem.

But ReSharper came to my rescue. It told me that I had a variable that I was never using. After a further look, I realized the problem and fixed it with a huge sigh of relief! The message looks like the image below. When you see these warnings, you can decide what to do with the variables. You can use them or delete them using ReSharper’s IDE. This helps you to clean up your code or find silly mistakes like the one that I made.

I hope that I have been successful at conveying to you the awesomeness of ReSharper? I even showed it to 1 of our developers. This guy is really freaking smart, but also really freaking angry. He was actually impressed with how ReSharper helped us to refactor. Now that is a fact that has more weight than 10,000 words on my real examples of ReSharper features! So give it a try and let me know what you think. If you completely disagree with me, let me know why. If you love some other features, please share so that I can learn as well. The only drawback that I saw so far was that ReSharper makes my IDE slower. But, it’s worth that small performance degradation.

Talk to you all later. Peace, love and automation!