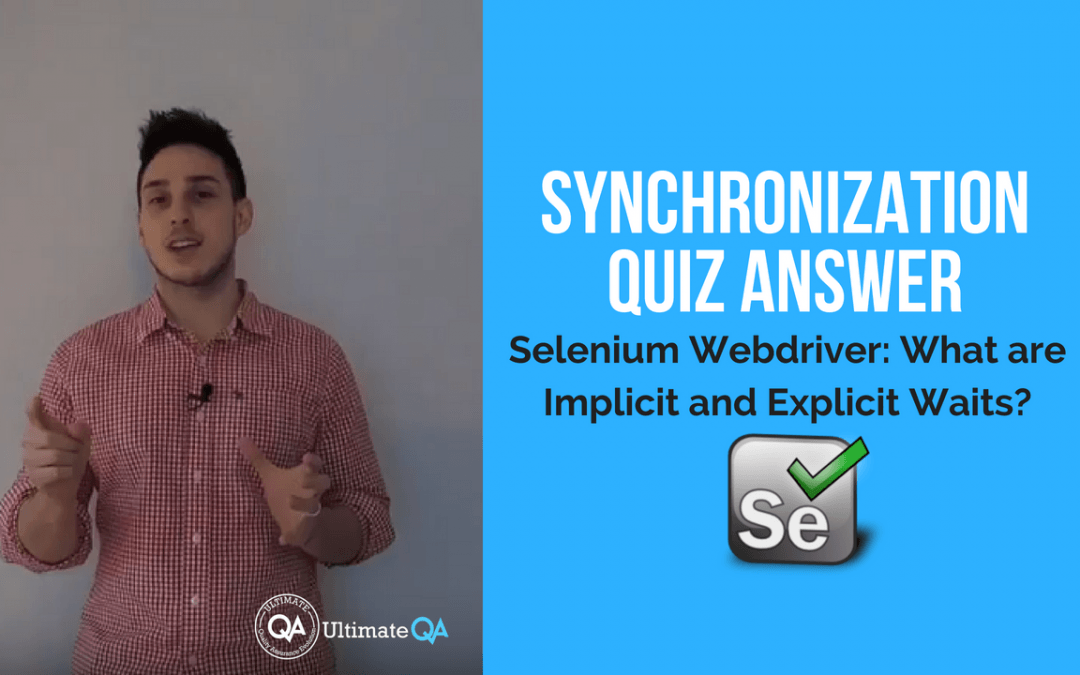 In the previous video, we took the synchronization quiz. In this video, we will learn the answers to the quiz.

So how did you do?

Hopefully, that wasn’t so bad. I’m guessing you spent at least 20 minutes trying to figure this out.

If you spent more, of course, not a problem. This wasn’t an easy exercise.

But it was a medium style exercise but of course, you’re learning new skills so it may have taken you a little extra time.

And if you went through it and actually got it working, that’s fantastic!

That’s one of the most important skills to have is to be able to persevere through failures because they’re very common with Selenium webdriver especially as we’re learning and writing test automation.

So here’s my solution. Keep in mind that your implementation may have differed from mine.

The locators all that kind of stuff there’s you know obviously many different directions that we could have gone.

I’ll tell you why I made the decisions that you made and if you think that your decisions were better and that’s cool your implementation could be better but if not you can kind of use my logic to help guide you.

In the future so standard opening up ultimateqa.com, not a problem of course we had to maximize the window because if you didn’t and you have a small size window, my browser, my website is responsive so all the links disappear and so you get this kind of style of navigation so anything after that would make everything really hard.

So all I did was use its class name that was a unique class on that page and I synchronized to make sure that the element is visible waiting for a maximum of 5 seconds.

The reason I chose to do that was because I know that after that element loaded, thre are several other elements that were loading.

The waterfall chart in the network. Let me refresh my page. So as you can see, there’s a lot of stuff going on here.

It’s kind of like toward there’s many more elements after it that load you can see here so I wanted to keep it safe and just use another implicit explicit wait. And so I use an explicit wait using by link text for the automation exercises which are right there. So I was looking for an element found with link text so you know worst case, if it’s already there we just proceed. If not, it will wait for an extra five seconds which is better than a flaky failure.

Next, we went to the automation exercises page.

We’re actually all of the elements were loading almost simultaneously.

I wonder if it’s because I had it cached. I’m not sure but when I looked at it almost all the elements were loading at the exact same time so, I just chose an obvious one which was to use the header that contains the text automation practice and then once the header was loaded and now seeing the waterfall chart again it may have been a mistake.

Let’s see. Yeah maybe this Amazon PNG could have been one of the better elements so that was possibly it could be improved on mind but after I synchronized on that I clicked the link with link text called big page with many elements and then after that I did a final synchronization which was checking for this image called girl with laptop.

So that was happening somewhere towards the bottom here let’s keep looking um trying to see it and give me as oh it’s down here all the way at the bottom you can see girl with laptop JPEG.

So there’s girl looking at a laptop. So that was an element that I chose to synchronize on.

Why? Because it’s one of the last elements to load in our waterfall chart on our website so using the title I was obviously able to nope sorry about that I was able to go into elements and then using control laughs I was able to search for a girl – with laptop so here I have that element.

If I run it for you which is always the funniest part.

No. I shouldn’t have debug this but I should run it. But it doesn’t matter if I run it for you.

So we can just take a look here.

It’s gonna expand the browser as you see is gonna click the automation exercises it’s waiting for it to load as you saw now it’s waiting for this page to load as well and then it’s closed because everything on the page is loaded and we get a green checkmark saying that our test has passed.

So if you did it, congratulations. You’ve successfully mastered synchronization now just continue to apply these techniques to the rest of your automation tests.

[Tweet “Learn everything you need to know about Selenium Webdriver implicit and explicit waits.”]

This is the final video tutorial of the course about Selenium Webdriver implicit and explicit waits.

Are your automated functional tests flaky? Do they randomly fail and you are unsure why? Is your team frustrated with the “instability” of your Selenium Webdriver tests?

If you are interested in fixing all of these problems and making your tests more stable, then you need to understand how to use all of the different types of waits in Selenium Webdriver. Knowing how to handle synchronization issues will make you a top-notch Test Engineer!

“The best tutorials I have ever seen, simply awesome. I take off my hat in front of you, you are a gorgeous professor, I am speechless to express how satisfied I am with these tutorials.” -Lisbey

– Learn the problems that can occur as a result of improper synchronization.

– Learn how to use Selenium Webdriver explicit waits.

– Understand what a DefaultWait is

[Tweet “Learn how to correctly use implicit and explicit waits using #Selenium #Webdriver.”]