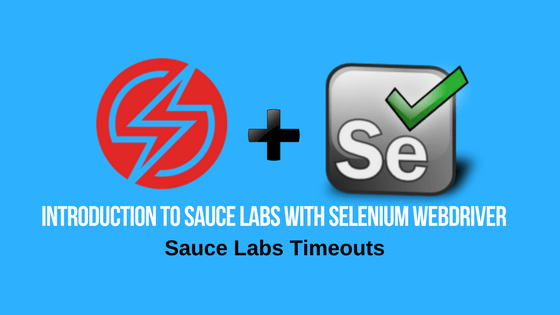 In this video, we will learn about the different timeouts in Sauce Labs. In the previous tutorial, we learned how to do live debugging.

I quickly wanted to bring your attention to three important timeout values that you might face especially when debugging you might run into some issues. So I wanted to show you how to overcome some issues when you’re doing some debugging. So there are three timeouts that you can set in sauce labs.

There’s the maximum test duration time out there is basically how long your tests should run. So by default, it’s set to 30 minutes and obviously you’re none of your tests should be running 30 minutes, in fact, they even recommended here. That’s way too long. I believe that no automated functional test should run more than one minute. But that’s just my belief.

I think that if it’s running more than one minute then it’s probably a very brittle test that is likely breaking way too often especially with functional Google automation. So if you want to set any of these values you know you just simply go to Visual Studio and set them like we’ve been setting them before. In a over here just by setting different capabilities. Then there was a command timeout the commands. Timeout.

Let’s sauce labs know how long a certain selenium command may execute. There may be times where your selenium try to run a command and maybe your web application is down or maybe is just really slow and it’s taking a selenium command a really long time to execute. So there’s a maximum amount set for that as well. I’ve actually never messed with this one. I usually just leave it to default. And then there’s the Idle test time.

This will come in handy for you when you’re debugging in the sauce labs browser. So the idle test timeout is basically how long can you test be paused before it fails with an error and that the default is 90. However, I usually set it to anywhere from 5 minutes to a maximum of a thousand seconds which is the maximum here because sometimes I want to be in the browser debugging for a little bit and I don’t want the test to be timing out. So if you want to set that value you can go ahead and set it.

Like I said I prefer a higher value of 5 minutes to 1000 seconds.

[Tweet “Here are the different timeouts in Sauce Labs.”]

In the next tutorial, you will take a quiz on Sauce Labs concepts.

This course is an introduction to Sauce Labs with Selenium webdriver.

Taught by Nikolay Advolodin, CEO of ultimateqa.wpmudev.host. He had been teaching test automation for 5 years and is the author of top rated online courses to 50,000 students in over 100 countries around the globe.

– Why Sauce Labs is an amazing test automation tool.

– How to analyze results.

– How to perform live debugging.

At the end of the course, you will take a final quiz along with the answers to the quiz questions for better understanding.

[Tweet “Learn everything you need to know about Sauce Labs with Selenium Webdriver.”]